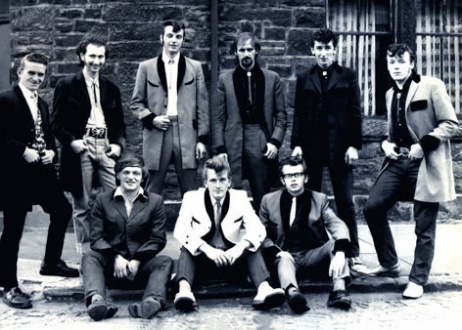 The subculture Teddy boy was emerged originally from Britain in1950s, the years after the War. Typified by the style of upper class youths who want a chance to change instead of austerity imposed by the society, wearing garments which was designed to shock their parents’ generation. To society, Teddy boys are labeled as anyone who causing trouble and smokers. They usually gather at the dace halls, hide in the bar, hanging around and drinking as a group who drawn attention by the society. Their behaviour was terrified, razor attacks, fight between gang and even actions against the police and robberies. Those action reflected that they were willing to have more freedom and wanted an open-minded new age, also they pass on this message by what they wear and the way they act.

The fashion style of Teddy boy was adopted from the Edwardian era, which was then just over forty years previous. The Edwardian wear tapered trousers, long jackets and fancy waistcoats in feature. 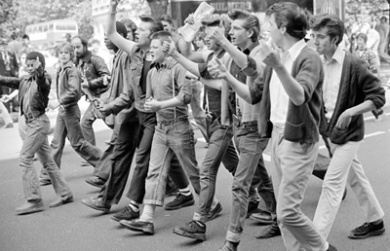 Teds usually gather at the dace halls, hide in the bar, hanging around and drinking as a group, who were called as “gang”.

There are few garments put together as a trademark of the look. For top is an Edwardian style single breasted wool jacket with velvet collar using plain material with navy or gray in common, smart shirt with loud bootlace tie. For the bottom, is a narrow ties and drainpipe trousers with horizontal stripes. The favorite footwear of Teddy boys is Denson supplied crepe shoes with thick crepe soles. At the time, a full set of Teddy boy suit was cost very expensively. 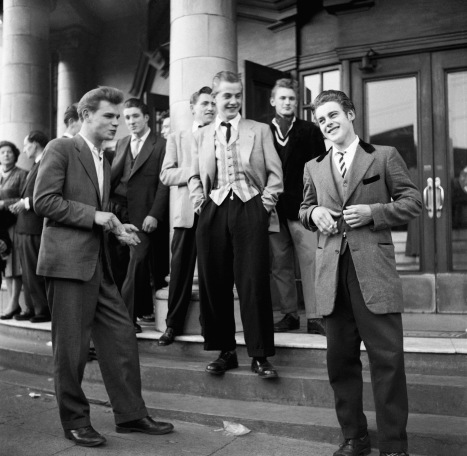 The hairstyle of Teds is also very recognisable. They wore extra long and greased hair using plenty of hair spays and cream to get the style and it was like a sausage shaped on top of the head, a quaff at the front and a swept at the back. 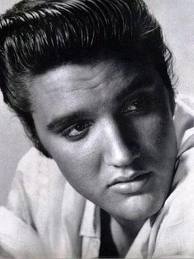 In the 50s, the relation between fashion and music entertainment is cannot be separate. Rock and Roll was adopted by the youths because of the style by Teds. Many rock stars became idols of teens and changes the outfit of all the movie stars and singers, this made a huge influences and breakthrough. Nowadays, stylists still willing to put fashion elements from Teddy boys into pop stars－Elvis Presley, Bill Haley.

No matter it is an old-fashion subculture, the trend still last till now. Many brand had adopted the subculture “Teddy boy” for their inspiration, such as Paul Smith , Bottega Veneta and Dior. I love the hairstyle of Teddy boys because it is stylish and looks cool. In fashion, I think there is lots of impossibilities can put in garments designs. There are lots of interesting subcultures; digging into these can find new inspiration of new outfits and put myself further in fashion design.